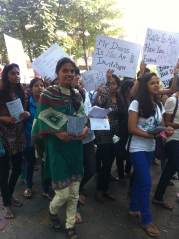 While I (Pooja) was only in Mumbai, India for two short weeks, I was able to observe (and participate in!) acts of social justice through activism. I was pleased to notice so many young women in organizational and leadership roles.

A week before I had arrived the Indian Supreme Court had reinstated a law criminalizing acts of homosexuality (Section 377 in the Indian Penal Code). I, along with many others, was shocked. This was a huge step backwards for India and its people, in my opinion. Within a matter of days rallies were organized all over India to protest. One of the major rallies was held in the park around the corner from where I was staying. Although the news of Section 377 was truly saddening, I was uplifted to see the youth organize themselves so poignantly. This rally received a lot of coverage and gave hope back to many who had been personally affected by this decision.  Below is a link with some images capturing the spirit of the protest in Matunga, Mumbai:

A few days later, while taking a morning walk, I passed by a large group of young girls

protesting against the treatment of women in India. Over the past year, media sources in India had shed light on a few horrific rape cases from around India. I asked one of the young women protesting what had inspired them to take this injustice upon themselves. She told me they had organized themselves because they wanted to have their voices heard and their message conveyed: “We are not going to stand for the mistreatment of any woman, anywhere.” For the past week they got together, outside of school hours, to make signs and spread the word. In total there were about 100 young women protesting. They had made there message clear. They stood in solidarity with women all across India. Pooja