When thirty-eight year old Cassandra Ryan discovers her grandmother Nell’s secret – that she was not the biological child of her parents, but a foundling – she is intrigued. Inside the suitcase found with the abandoned child at the Port of Brisbane in 1913 Cassandra finds a package of letters, a children’s storybook, and a coded manuscript belonging to Eliza Makepeace Rutherford: the Victorian authoress of dark fairy-tales who disappeared mysteriously in the early twentieth century. And so begins the quest to solve a century-old literary mystery.

I found the story line more interesting than some of Morton’s other books, partly because it was about a woman- Eliza Makpeace (Authoress)- who wrote fairy tale stories for children. The stories were included in the novel as chapters: The Cuckoo’s Flight, The Crone’s Eyes, and The Golden Egg. I particularly enjoyed the Crones Eyes. Deliciously dark!

As a collector and teller of traditional folk lore (I love the collections of Lang, Grimm and particularly, Jacobs), I found her stories strikingly similar to the old folk tales of Europe- frightening and heroic. People often died in those, not like in the Disney versions of today (e.g., in the original Andersen version of The Little Mermaid, the mermaid dies). As I was mulling this over, I happened to come across Morton’s acknowledgements:

I would also like to pay tribute here to authors who write for children. To discover early that behind the black marks on white pages lurk worlds of incomparable terror, joy, and excitement is one of life’s great gifts. I am enormously grateful to those authors who’s works fired my childhood imagination and inspired in me a love of books and reading that has been a constant companion. The Forgotten Garden is in part an ode to them.                                               Kate Morton

I was warmed by this acknowledgement. I think the stories of our youth live in us forever. If you enjoy traditional lore as much as I, I highly recommend reading The Forgotten Garden. For my part, I plan to write to Kate Morton’s publisher to obtain permission to tell them. They would make a delightful set at a festival and would hopefully fire the imaginations of the children (and adults) who listen. 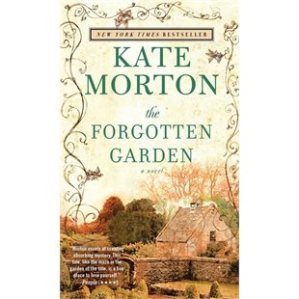