Posted on May 10, 2016 by creso.sa in International Dialogue

Our (Clive and Clare) good friend Ruth Hayhoe posted this blog on https://ciheblog.wordpress.com/2016/05/10/a-chinese-alternative-to-the-global-research-university/ We found it very interesting because it presents an alternative to the research-intensive focus of so many North American universities.  Ruth has a long history of involvement in China and knows the country well. Here is a link to her homepage on the OISE website: http://www.oise.utoronto.ca/lhae/Faculty_Staff/384/Ruth_Hayhoe.html

Southwest University in Chongqing, a city of  30 million in West China, celebrated a 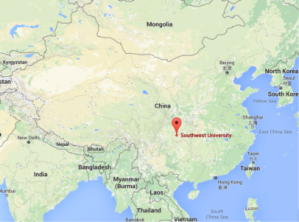 history of 110 years on April 17 and 18. It has been a major normal university for the Southwest region since 1952 but ten years ago it was allowed to merge with its neighbouring agricultural university and drop the word “normal” from its name. Teacher education is still a strong focus and the celebration was combined with a conference on reciprocal learning in teacher education, where teacher candidates from schools in Canada and China reported on their valuable learning in exchange programs.

School principals from Windsor, Chongqing and Shanghai shared the rich results of mutual learning in school partnerships. Three OISE doctoral students who have facilitated some of these partnerships gave papers as well as doctoral students from Windsor, Southwest University and other partner universities in Shanghai, Beijing and Changchun. All have been working together under a major SSHRC-supported partnership grant led by Shijing Xu of the University of Windsor and OISE’s Michael Connelly.

It was my privilege to give a keynote lecture at this conference and it was amazing to have nine presidents or vice presidents of normal universities from all parts of China in the audience. They had come to celebrate SWU’s 110th anniversary.

I have become convinced in recent years that the normal university created by France after the Revolution is a model capable of blending rich values of China’s Confucian tradition with important elements of the European tradition of education. These  were never well supported by the European university model,  now the “global research university”, which dominates the ranking game and gives much greater importance to research than pedagogy or the student learning experience.

My talk was a preview of the keynote lecture I am working on for the 16th World Congress of Comparative Education to be hosted by Beijing Normal University from August 22-28 of this year. It will be the first time for the Congress to be held in China at a symbolic moment when China is seen as having moved from the periphery to the centre in both economic and geopolitic terms.

I will challenge China’s educators to explain the normal university to an Anglo-American world that has forgotten what it means, and bring China’s rich educational civilization into global discourse in ways that balance the overweening dominance of the global research university.