On June 9, Canadian author Rachael Preston will be unveiling a Project Bookmark Canada plaque for her novel The Fishers of Paradise, that depicts the struggling squatters that occupied Cootes Paradise in 1930. The plaque is to be installed along the Desjardins Waterfront Trail in Hamilton, under the second rail bridge. I’m proud to share Rachael was a member of my writing critique group, so I was lucky enough to see the book develop. It’s a fascinating novel and I highly recommend it. It sheds light on an aspect of Hamilton history that was truly buried until now.  Book clubs- take note!

The boathouse community of Cootes Paradise is under siege. The squatters’ shacks that line the shores of Dundas Marsh stand in the way of an ambitious politician’s “City Beautiful” plans. When a handsome drifter settles there, Egypt Fisher and her mother both fall under his spell. No one expects Egypt’s gambling con-man father to return after a mysterious six-year absence. But he does and he’s furious. Unhinged by jealousy and a harrowing brush with the local mafia at a cockfight, he reveals a family secret that sets Egypt’s world off-kilter and poisons her relationship with her mother. When Egypt tries to turn the situation to her own advantage, her lies set in motion a series of events with devastating consequences.

Rachael Preston now  lives in Departure Bay, Nanaimo, on Vancouver Island, British Columbia. She moved to BC from Hamilton, Ontario, where we’d been for ten years. She has authored three novels, Tent of Blue, 2002, and The Wind Seller, 2006, both with Goose Lane Editions. In 2012, she self-published The Fishers of Paradise.After winning Arts Hamilton’sinaugural Kerry Schooley Award for the book most representative of Hamilton, Fishers, was picked up by Wolsak & Wynn and reissued in April 2016 under their new James Street North Books imprint. 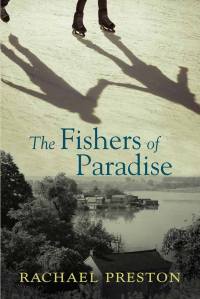