Nora Young, the host of CBC Radio’s Spark, was the keynote speaker of a conference I (Pooja) attended yesterday. She spoke about data science as a growing field of study, in fact, many universities have created departments of data science.  With the growth, Nora noted, comes a need for what she called critical data literacy. She illustrated the need for critical data literacy with an example of mapping technology. Google maps have quickly become the go-to application for finding directions and/or locating businesses on a map. However, being critically data literate,  guides us to  question like: who gets to decide what appears on a map? The answer is most often large multi-million dollar enterprises like Google.

To disrupt google’s monopoly of the growing online map industry, initiatives like Open Street Maps have been created. In January of 2014, The Guardian commented on the need for applications like Open Street Map. They likened it to  “a wiki-like map that anyone in the world can edit. If a store is missing from the map, it can be added in by a store owner or even a customer. In terms of display… each person or company who creates a map is free to render it how they like..” (Wroclawski, 2014) A site, which allows community members to add and edit a map of a community to which they belong, is powerful because it positions community members as experts.

I am looking forward to bringing this mapping technology into my classroom. I hope my students can create maps of their neighbourhoods.

A snapshot of a map made by community members: 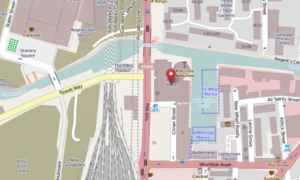