The school year began in Canada at the same time we experienced many human tragedies across the world. In this peace-less world, I’ve (Gisela) 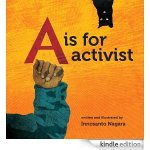 discovered, by chance, an interesting book for young children: A is for Activist by Innosanto Nagara, http://www.aisforactivist.com. From Activist to Zapatista, this “children’s book for the 99 percent” offers different rhymes and perspectives to small children.

The book is described as:

Activist is an ABC board book written and illustrated for the next generation of progressives: families who want their kids to grow up in a space that is unapologetic about activism, environmental justice, civil rights, LGBTQ rights, and everything else that activists believe in and fight for. The alliteration, rhyming, and vibrant illustrations make the book exciting for children, while the issues it brings up resonate with their parents’ values of community, equality, and justice. This engaging little book carries huge messages as it inspires hope for the future, and calls children to action while teaching them a love for books. http://www.amazon.ca/Activist-Innosanto-Nagara-ebook/dp/B00DIGNCNU/ref=srA is for _1_1?ie=UTF8&qid=1410614592&sr=8-1&keywords=Innosanto+Nagara

As Corey Hill wrote in 2012 (http://www.yesmagazine.org/people power/in-review-it-is-for-activist-by-innosanto-nagara) “It’s pretty clear from page one that this is no Cat in the Hat. Billed as a book for the children of the 99%, A is for Activist is the radical vision of Innosanto (Inno) Nagara, a graphic designer and social justice activist from Oakland, California.

Although the book is said to suitable for children from birth to three years to age I wonder about the impact of reading it to such young children, and I wonder if it would be better suited for older children who have ideological knowledge and experience. The illustrations are gorgeous and the rhymes reveal ideas about the rights of all in the hope of a world more with fewer ills. It is a lovely text to start the school year in which conflicts and wars in the four corners of the world threaten children around the world! It can serve as introductory material to literacy and can serve as an inspiration to parents and educators about the social function of writing and literature for children.