We become so entrenched in our own ways of knowing and doing that in order to realize something different we must experience it — with our senses and hearts.  I (Yiola) had the privilege of attending a high school graduation in the USA as a spectator, as a parent. This experience reminded me of the differences across Canadian and American education systems.

The American high school graduation was far different than my Canadian experiences of high school culture. Everything was bigger. East Madison High, with over 400 graduates, held its high school graduation ceremony at the Kohl Centre (oops, Center), which is a huge sports stadium, similar to our Air Canada Centre. There was a choir, and a band, and the speeches were shown on the big screens.  The concession stands were open, there was security at each isle and uncover police were walking among the crowds. I felt like I was at a rock concert.

Much like our ceremony, there were speeches, and songs, and students were called up to the stage and given their certificates. Unlike our ceremony there were speeches given by the school’s Security Guard and school council as opposed to a selected valedictorian.  Really, the cultural context (seems obvious) of the speeches was just different. There was much focus on the sports teams, the arts, and less on academics. There was much talk of community and resilience and less talk of literature, writing, or literacy… although, there was mention of spoken word and some rap embedded in the speeches.

As I sat in the arena at Madison, Wisconsin and looked at the beautifully diverse group of high school graduates I thought about the remarkable work of the students, the teachers, and the scholars of the education community and felt a deep sense of appreciation for their work; a constant movement against the grain of standardization and numeration. I saw individuality immersed in institution. I saw creativity wrapped in convention. I saw hope.

Congratulations to all high school graduates. 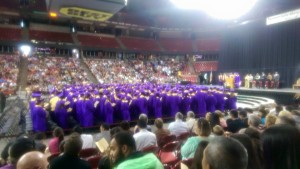 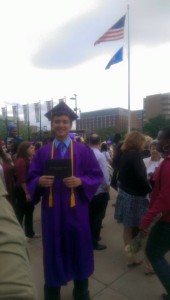